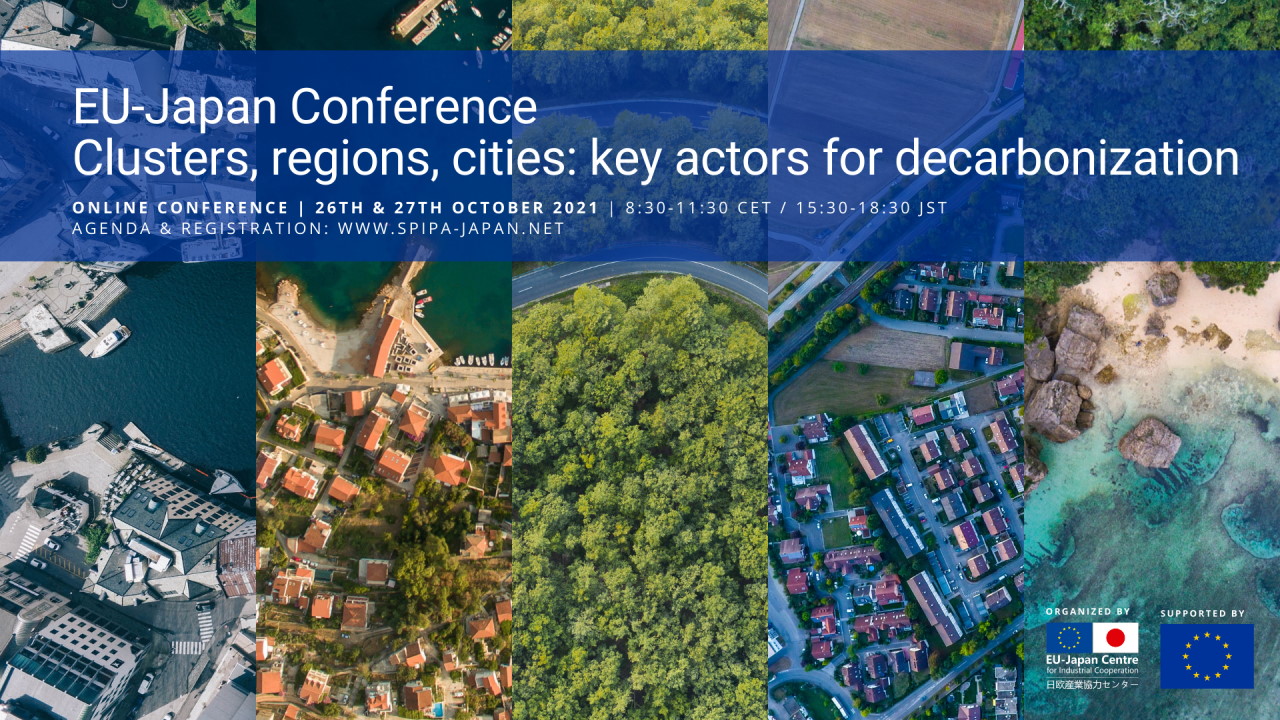 “Think global, act local”. In Japan and Europe, local stakeholders – clusters, cities, municipalities, regions, prefectures – are at the forefront of decarbonization. Building on a strong sense of ownership and belonging, local ecosystems are well placed to take and implement initiatives for the green transition. Connected with other local actors both at national and international level, they share experiences and learn from others, expanding the range and scope of their efforts.

Transport, construction, urban planning, local renewable energy, circularity of resources, citizens engagement… In all these key areas for the decarbonization of our economies and societies, Japanese and European regional clusters and local governments already take ambitious and innovative actions. Their efforts also expand to other sectors deeply connected to territories, such as agriculture or tourism.

This online event took the audience into a virtual tour of leading European and Japanese clusters, cities and regions on the pathway towards carbon neutrality.

Using long-term planning, governments from regions and cities in Europe and Japan guide local stakeholders – economic actors, public operators, citizens – towards clean energy and decarbonization. How do they set achievable goals at municipal or regional scale? How do they translate these goals into sectorial guidelines? What mechanisms, from regulations to subsidies, do they use to accompany and accelerate the decarbonization of their territories?

Renewable energy sources are, by nature, decentralized. Sun, wind, biomass, geothermal, energy from rivers and seas are geographically distributed across regions in Europe and Japan, placing local actors at the forefront of their mobilization to locally produce renewable electricity, heat and gas. What policies do cities and regions implement to accelerate the substitution of fossil fuels by clean sources of energy? How do industrial clusters and agencies facilitate local innovation for the transition to renewable energy?

Important emitters of greenhouse gases, agriculture and the food industry are also part of the solution for carbon-free societies, and essential components of the local economy in many regions. What initiatives do regional actors from Europe and Japan implement for low-carbon agriculture and food systems? How could Japan and Europe further cooperate on this issue?

Reducing the environmental footprint of transport is a major challenge for all cities and regions, as the transport industry has been built on fossil fuels for more than a century. From bicycle-friendly roads to smart public transport, from zero-emission vehicles to shared mobility, how do municipalities, regions and transport operators tackle the CO2 emissions of urban and interurban mobility across Europe and Japan?

From raw material procurement for construction to energy consumption during the lifecycle, the housing sector is one of the largest emitters of CO2 both in Europe and Japan. How do local governments steer the construction industry towards low-carbon buildings? How can environmental efforts in the housing sector be combined with social benefits for tenants? What techniques and technologies, from biomaterials to energy efficiency systems, are being developed by local innovators to reduce the carbon footprint of residential and commercial buildings?

Both Europe and Japan are privileged destinations for local and global tourism. As the world will recover from the pandemic, how do local actors make sure that tourists can enjoy their visits and stay with the lowest possible level of CO2 emissions? How can Japan and Europe work together towards a low-carbon tourism?

Concluding the conference, two cities recognized for their commitment to decarbonization illustrated how they became local leaders for climate action, paving a way towards carbon neutrality and acting as a role-model for other cities and regions.

An award-winning Irish journalist, Karen Coleman has moderated a significant array of events over the years including major international conferences for clients such as the European Commission, European businesses and environmental organizations. Among other events, she worked on past editions of the European Green Week, the European Smart Regions Conference and the Transport for Smart Cities Conference.

END_OF_DOCUMENT_TOKEN_TO_BE_REPLACED
Online
31/12/2022
LEAN MASTERCLASS
An 8-part lecture series giving a sound introduction to the practical concepts of applied lean. The EU-Japan Centre Lean Masterclass consisted of lectures, by Professor Richard Keegan, focussing on…
10/01/2023
'About Japan' webinar series 204: Rethinking strategy for Japan - B2C
10-01-23 | 10:30 - 11:30 AM CET   Do you want strategic insight, tactical guidance and real-life examples of how to succeed in the Japanese market? Upon providing an overview of relevant B2C…