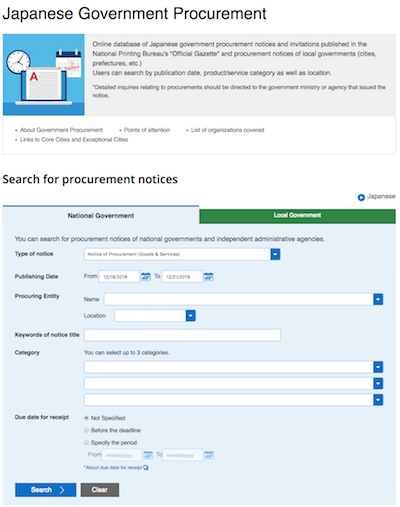 Although the information offered on the portal has not changed: - It still provides summary notices and invitations taken from the “Government Gazette and procurement notices published by local governments such as designated cities and prefectures, a number of improvements have been introduced.

The search section has received a make-over with a more user-friendly interface, improvements include:

Also lists of government organizations covered, both at the central and sub-central government level are provided. The lists also includes local independent administrative agencies which were part of Japan’s offer for increase scope in the EU-Japan EPA. Core cities, which will also open their goods and services procurement opportunities to EU suppliers, have not yet been added in the list.

The redesigned JETRO Government Procurement pages are available at https://www.jetro.go.jp/en/database/procurement/

END_OF_DOCUMENT_TOKEN_TO_BE_REPLACED
Japan
16/05/2022 - 27/05/2022
Get ready for Japan
"Due to the current global health situation, the EU-Japan Centre for Industrial Cooperation replaced its 2-week physical programme in Japan by a 2-week online programme. The objective of this…
Virtual mission
18/05/2022 - 20/05/2022
Food & Drinks Virtual mission in May 2022
With the aim of supporting the EU food producers in Japan, the EU-Japan Centre is offering the opportunity to selected EU SMEs to virtually exhibit during ifia the International Food Ingredients…