According to the European Automobile Manufacturers Association (ACEA), the number of registered Electric Vehicles (EV) in the EU passenger car market of the second quarter of 2020 increased by 53.3% year-on-year to 129,344 units, and the share in the entire passenger car market expanded significantly from 2.4% to 7.2%. ACEA estimates that new car sales will decrease by about 25% in 2020, but with regards to EV, the further growth can be expected, mainly because, the subsidies for EV purchases,  such as in Germany and France as an economic recovery measure from COVID-19, boost sales and the new EV models will be released by VW Germany, Renault France, Tesla the US, etc. in the EU market.

What is interesting is that the concept of EV is gradually changing not only in the EU but also in the world. EV are classified into HV, PHV, BEV and FCV (see each definition above mentioned), but there was a tendency that HV, which are the mainstream in Japan, are not recognised as EV because they are basically gasoline-powered vehicles. However, when CAFE (Corporate Average Fuel Efficiency) regulations began to be introduced around the world, HV began to attract attention and major manufacturers began to adopt them, because which can easily reduce CO2 with less cost than BEV. Moreover, the mild HV is at the center, in which the electric motor operates only at the time of starting and braking, avoiding the full HV with a complicated software design. However, HV can contribute to CO2 reduction more than ICE, and it is not bad to increase this in terms of environmental consideration.

On the other hand, looking at the Japanese market, Japan Automobile Dealers Association (JADA) announced that passenger car sales in Japan from January to August decreased by 20% year-on-year, which is still far from the market recovery, and there is no significant change in the sales ratio of EV. As you can see in the graphs below, the sales ratio of HV in Japan is 36.8%, which is high compared to the EU's 9.6%, and in a sense, it can be said that the electrification rate is the highest in the world. However, the share of BEV is only 0.6% of the total and less than the EU's 3.6%.
In Japan, BEV is not widespread because of concerns about cruising range, long charging time, high vehicle prices and other issues. Additionally, there is no big motivation for consumers to buy BEV because of their strong satisfaction with HV. On the other hand, vehicle manufacture side is aiming to switch to FCV without going through BEV. Currently, only two models of FCV passenger cars are sold in Japan, but expectations are high for hydrogen energy vehicles with zero emission that do not require charging. Of course, it will take time for this to spread, so there is a view that Japan has to shift to BEV as a transition period to FCV.
By the way, the share of imported cars in the Japanese passenger car market is about 15% (300,000 units), and most of them are from the EU. But in the total import, the ratio of EV as a total of HV, PHV and BHV (January to August), is only 8% (Note: US Tesla does not announce the import record). However, considering the rapid spread of EV especially BEV in the EU, the expansion of EV imports from the EU to Japan is expected in the future. It is highly possible that the EU will significantly change the Japanese BEV market. 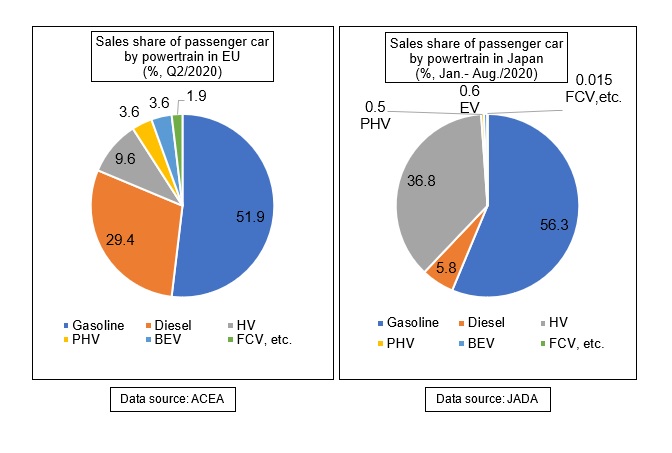