European company shares in Japan's government procurement market drop in final year before conclusion of EPA – Japanese government survey
The latest edition of the Japanese government's publication on government procurement prepared by the Cabinet Office, shows that gains by European suppliers made in 2017 evaporated in 2018. The latest edition of "Japan's Government Procurement: Policy and Achievements Annual Report - Toward Government Procurement Open to the World", one of the few comprehensive reports on government procurement in Japan, shows that in terms of value, European suppliers were less successful in 2018.
In 2017, EU suppliers were awarded contracts worth close to €400 m, but this more than halved in 2018 to close to €140 m. Procurement of goods and services produced by EU suppliers (sold by distributors or agents) saw a decrease as well. The value dropped from close to €500 m down to approx. €280 m. On the other hand, growth in the number of contracts awarded to EU companies gives hope for some positive development in the future. Both the number of contracts awarded directly to EU-bases suppliers (2017: 157; 2018: 180) and those for EU-produced goods and services saw a slight increase (2017: 346: 2018:366).
While not specific to EU suppliers, the figures presented in the report show Japanese central government organisations spent less on IT services, professional and scientific equipment, and IT hardware in 2018. It is likely that this will change in the coming years, as Japan's underinvestment in IT infrastructure has come to the fore by the challenges caused by COVID-19 and the current drive to improve IT infrastructure in Japanese educational institutions.
Going through the 1.100 odd pages report, which consists primarily of procurement records supplied by 139 central governmental organisations, the absence of foreign suppliers based outside of Japan is quite striking and suggests that a local presence in Japan is still seems to be a prerequisite for enterprises to secure a contract with the Japanese government. Instances where contracts are awarded to companies outside of Japan, concern mostly single tenders to procure unique products or services such as access to academic publications or financial services.
While the report has its limitations in terms of scope and coverage, as it only deals with a portion of the total of Japan government procurement, JTPP Helpdesk is eagerly awaiting next year's edition covering 2019 as it will be the first one to include government procurement under the EU-Japan EPA and provide an insight into the impact of the EPA on government procurement for EU businesses.
Interested in business opportunities for your company in the Japanese public procurement market? Get the latest tender information by subscribing to JTPP Helpdesk's free Weekly Tender Digest!
The Report (published April 2020) is currently only available in print 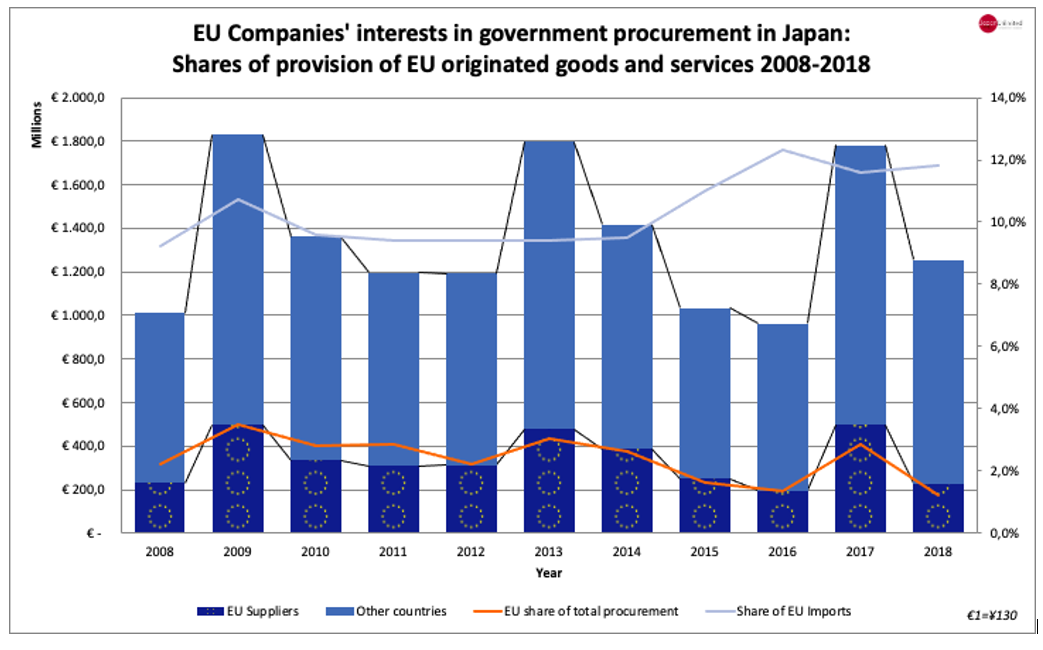