Digital Economy is a wide-ranging concept that refers to an economy based on digital computing technologies, which is increasingly becoming inseparable from the traditional economy . The digital economy emerging is the result of  countless everyday online interactions and interconnectedness between people, businesses , devices and processes.

Underpinning a digital economy is the spread of ICT across all sectors of human endeavours, that in turn is radically changing the ways how social organisations such as businesses and governments are structured, and how consumers and citizens  interact with those businesses and their governments.

Governments in turn face the challenge to steer the effects of digitalisation into directions that serve both the public good and create an environment for further development.  The European Commission monitors the progress of Member States in dealing with the challenges of digitalisation in the Digital Economy and Society Index  (DESI) , that covers five dimensions:

In the development of the digital economy in Japan, the term 'Digital Transformation', most often abbreviated to DX,  is nowadays the buzzword most frequently used for initiatives to further digitize Japanese society.[1]

Although Japan has well-known global corporate players in terms of hardware and games platforms, the country has been seemingly unable to catch opportunities of the IT-revolution to the fullest, when compared with the US. The US has generated much of its economic growth during the past decades with the development and integration of software. Japanese industry has given birth to gaming software universes such as Nintendo, Sega and Sony, but has been unable to come up with an internationally renowned equivalent of Google, Amazon, Facebook or Apple.

This does not mean there are no large system integrators of Japanese origin: The top-10 of tech companies is a mix of telecom IT-services companies and manufacturing conglomerates, with relative newcomer SoftBank as the largest in terms of market capitalization.

The high ranking of Japan in terms of connectivity and the presence of world-class players in IT-hardware concealed however a setting that in terms of digital integration is patchy at best. The Japanese state of digitization across both the private and public sectors combines world class solutions on the one hand, with highly robotized factories, while on the other hand 'digital deserts' symbolized by office-desks stacked with piles of paper on the other hand continue to be common.[4]

In the public procurement sector in Japan, this situation is also visible with many government entities until recently still requiring stacks of paper to be submitted in person and only allowing contact in person or by either telephone or fax-machines, while some entities have managed to develop more sophisticated online tendering systems and online communications.

The absence of up-to-date integrated IT systems in the Japanese government infrastructure and lack of a coordinated policy to improve digital public services, came into the limelight during the first months of the COVID-pandemic in 2020. It became clear that the coordination of government support efforts to citizens and businesses hit by the effects of COVID were severely hampered by the lack of an adequate government IT-structure.  Ministries were unable to communicate effectively with each other due to divergent systems and forced to use faxes to send information back and forth. Politicians and public officials were embarrassed to find out that neighbouring countries such as South-Korea were able to roll out reimbursement programs within a number of weeks, while they struggled with paper-based applications.

This led the incoming prime-minister Suga in September 2020, to announce that 'building a digital society' would be one of his key policies and he announced the creation of a new post of minister of digital transformation within 24 hours in office. The new minister was assigned with planning the establishment of a new Digital Agency (DA), directly under the wings of the Cabinet Office to spearhead and coordinate Japan's digital leap forward.  A main objective of the Digital Agency, that will officially start its activities this September,  will be to tear down bureaucratic sectionalism in order to improve public services across the board, as this was seen as one of the major factors in the failure of earlier digital government promotion initiatives during the past twenty years. [5]

In this Thematic Report on the Digital Economy in Japan we look primarily on the public procurement activities of the Japanese government related to digital transformation and the development towards full-fledged digital economy and attempt to assess the practical challenges and opportunities for EU SMEs with strengths in providing solutions to improve digital public services.

[1] Instead of DT, DX is used as the former was said to be confusing with a programming element. 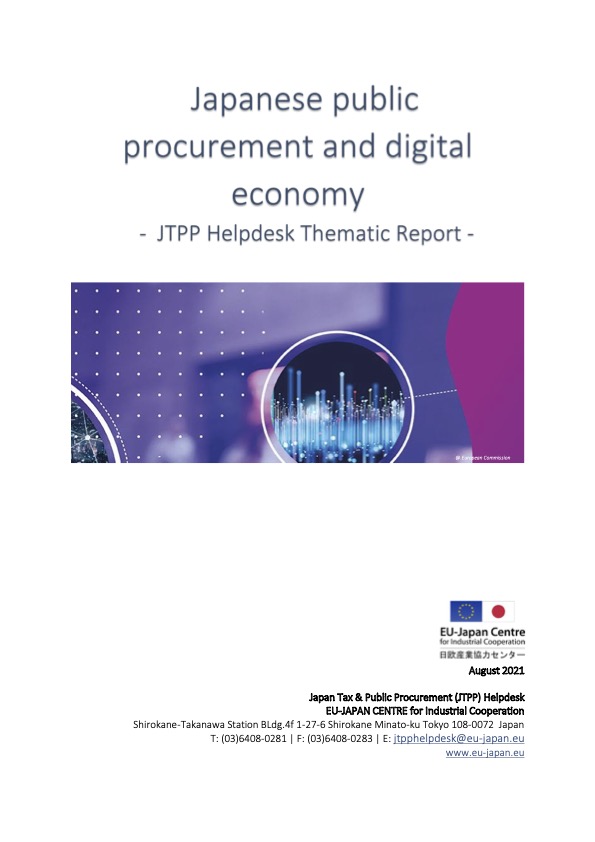 The full report is only available to EU-headquartered businesses. To obtain your copy of the report, please use the registration form and select the report of your choice. Please note that it will take a few days to review your request.

EU and Japan should build on strong partnership and strengthen cooperation
On 4 May, BusinessEurope sent a letter to the…
Request for Comments
In case a government entity has drafted…
Prior Information Notice
In Japanese procurement, Prior Information…

END_OF_DOCUMENT_TOKEN_TO_BE_REPLACED
Joint statement about the Centre
Joint statement signed by METI Vice Minister Hirose and Director General of DG GROW on the 35th…
October 27: Webinar Japan Tax Reform and E-Invoicing PEPPOL
The German Chamber of Commerce and Industry in Japan is organising a webinar on "Japan Tax reform A…
Japan press review 30 Sept. - 6 Oct. 2022
The EU-Japan Centre is pleased to start a new weekly service by publishing brief press reviews from…

END_OF_DOCUMENT_TOKEN_TO_BE_REPLACED
Japan
01/09/2022 - 31/08/2023
Vulcanus in Japan - A training programme for EU / SMP-COSME students
Check our 'Vulcanus in Japan' mobility action in this video including views from a participant - Everything you want to know in 5 min about our 'Vulcanus in Japan' programme ! Testimonials FROM…
Europe
29/09/2022 - 30/09/2022
LEAN VISITS IN EUROPE
The EU-Japan Centre is re-starting its in-depth site "Lean in Europe" visits to European plants to discuss best practice and facilitate the sharing of ideas and networking. The…