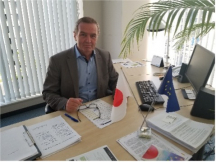 The year 2022 marked the 35th anniversary of the EU-Japan Centre for industrial Cooperation created in 1987 as a joint venture co-managed and co-funded by the European Commission (DG GROW) and Japan (METI). These 35 years together enabled us to gain a rich experience to deliver multiple positive outcomes in the EU-Japan relations, and operationalise our policy agreements, be it the EPA, SPA, Connectivity Partnership, Green Alliance, mobilising key stakeholders from sides, businesses, researchers, clusters and regions, students, and think tanks for promoting concrete cooperation between the EU and Japan.

The EU-Japan Centre is a political signal that both EU and Japan stand together for sustainable cooperation, and team up to preserve the benefits of openness, pursue resilient economies and inclusive societies. But perhaps above all, it has also developed over these years an intangible but pivotal dimension to build EU-Japan industrial partnerships, mutual trust.

For building business partnerships, the EU-Japan Centre has enjoyed over the last 10 years being the Enterprise Europe Network (EEN) Member in Japan, the world's largest business support network. During this decade, thousands of B2B have been organised leading to expressions of interest and many business agreements. Statistics and success stories recently published show the diversity of industrial and technological sectors covered as well as the SMEs involved in many EU Member States.

But probably the highest added value brought by the EU-Japan Centre to the EEN activities is that they are not standing alone. They actually provide and receive added value by being strongly connected to the other activities of the EU-Japan Centre such as our helpdesks on the EPA, public procurement, technology transfer, industrial cluster and the coordination with the Trade Promotion Organisation (TPOs) of the EU Member States, and the strong support from METI and JETRO in Japan. All together, they provide a coherent and synergetic ‘package’ integrating various tools, support and services.

Before joining the European Commission in 1992, he worked 10 years in industry as Head of R&D projects in Japan (IT company electronics & university of Tokyo), Canada (pulp and paper) and Italy (pharmaceutical company).

At the European Commission, he has been mainly involved in the innovation and industry sector, financial instruments for research and development in cooperation with the European Investment Bank, EU economic diplomacy and the internationalisation of European businesses.

Since 2018, he is the Managing Director (EU-side) of the EU-Japan Centre for Industrial Cooperation, and Minister Counsellor at the Delegation of the EU to Japan.

He has published several articles in various journals, given TV interviews, intervened in many conferences and webinars, prepared dozen of editorials for our quaterly newsletter, and tweeted regularly on multiple subjects.