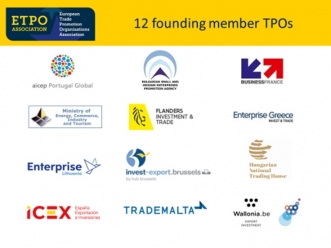 Mirroring the meetings of the Member States Trade Promotion Organisations organised regularly by DG GROW in Brussels, the EU-Japan Centre for Industrial Cooperation proposed early February to do the same “on the ground” in Tokyo. The objective is the same: sharing information and know-how, enabling cooperation and stimulating synergies. This initiative has been encouraged by the recent launch by 12 TPOs from several Member States of a structured “European Trade Promotion Organisations Association – ETPO – see founding Member TPOs below) to work better together. A useful initiative that TPOs from other Member States may wish to join in the future.

The feedback received so far from many TPOs Representatives in Japan, e.g. BusinessFrance, ICEX, Flanders Investment & Trade, AWEX, ICE, AICEP, AHK… is particularly encouraging.  The idea is to organise 2 or 3 meetings per year. The first one will take place in March 2019.

One of the key topics to be discussed is likely to be the implementation of the EU-Japan Economic Partnership Agreement. Informing, guiding and stimulating European SMEs to take advantage of the Agreement is an objective shared by all TPOs. The Centre is also contributing with the EPA helpdesk recently put in place, as well as other activities such as the Public procurement helpdesk or the Technology transfer and IP helpdesk.

The Centre is already having regular contacts with Member States TPOs but usually on a bilateral basis. These useful bilateral discussions will be maintained, but, in addition, regular discussion with – hopefully – all TPOs interested will enable scaling up  discussions and synergies, regarding e.g. business missions, fairs, intelligence reports on opportunities in Japan for European business, and overall to ensure that all TPOs are well aware and can benefit from the activities of the EU-Japan Centre for Industrial Cooperation. Last but not least, the Centre works on this initiative in close cooperation with the EU Delegation to Japan and the Commission services (DG GROW) in Brussels.

END_OF_DOCUMENT_TOKEN_TO_BE_REPLACED
Japan
16/05/2022 - 27/05/2022
Get ready for Japan
"Due to the current global health situation, the EU-Japan Centre for Industrial Cooperation replaced its 2-week physical programme in Japan by a 2-week online programme. The objective of this…
25/05/2022
Webinar on Promoting Research and Innovation in Hydrogen: Opportunities for Cooperation between the EU and Japan
Wednesday, May 25,  2022 JST 16:00-18:15 / CET 9:00-11:15  Simultaneous interpretation EN-JP Agenda: here Registration to participate: here (ZOOM) Hydrogen has many possible applications across…