A New Era for the EU and Japan Starts Now!

With the entry into force of the EU-Japan Economic Partnership Agreement (EPA) on February 1st, 2019, a new era for the EU and Japan starts, as rightly highlighted by the EU-Japan Business Round Table. The EPA creates the largest open-trade zone in the world which covers 600 million people. The majority of duties paid by EU companies will be removed. The Japanese market will be open to EU agricultural exports and opportunities will be increased in sectors like pharmaceuticals, medical devices, motor vehicles or transport equipment. Services markets, in particular financial services and telecommunications will open up. IPR will improve and obstacles to procurement in the railway sector will be removed. EU businesses are guaranteed non-discriminatory treatment in the procurement markets of 48 large cities in Japan. 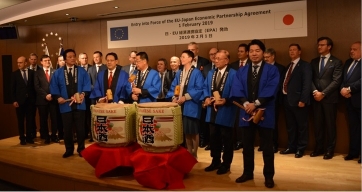 Not the end of the story!

However, the entry into force of EPA is not the end of the story: it is actually the beginning. The priority objective for the Centre is implementation. We should ensure that businesses, in particular SMEs, reap the maximum benefits from the EPA. The objective is 100% PUR (Preference Utilisation Rate) by all Member States, in all sectors covered by the EPA, and by all types of businesses, large, medium and small.

Today, there are 64,000 direct EU exporters to Japan all over Europe. More than 88% of them are SMEs. There are 1,300 EU companies operating in Japan. There are most likely many more SMEs which are potential beneficiaries of the EPA. Perhaps they are not aware of the very existence of the EPA. Maybe some of them think that they have nothing special to do to benefit from the EPA. These actual and potential European exporters to Japan should be informed. This means raising awareness, promotion campaign, dissemination of information, guidance and reaching out to the SMEs throughout Europe. A renewed emphasis on communication is important.

To this end, the EU-Japan Centre has set up an EPA Helpdesk with fact sheets, practical guides and a series of webinars. In conjunction with our existing Public Procurement Helpdesk, Tech transfer and IP helpdesk, our EEN related activities and a number of other activities to promote industry, trade investment, innovation and people mobility cooperation, we are putting in place a multi-facetted support to European SMEs.

For reaching to European SMEs, the Centre is mobilizing important relays in Europe, via existing pan-European networks, such as the Enterprise Europe Network, European network of industrial clusters, regions and European industry sectors. Here in Japan, the Centre is putting in place a group of Trade Promotion Organisations from the EU Member States for enabling further sustainable cooperation “on the ground” that is complementary to the TPOs discussion with the Commission services in Brussels. Together, we can better help European SMEs to take advantage of the EPA.

The EPA implementation is likely to also trigger an overall positive momentum for EU and Japan to look more at each other. This trigger effect of the EPA will leverage current and new cooperation. For example, in the area of research and innovation cooperation, space cooperation, digital economy, circular economy, climate, security and defense cooperation, regulatory cooperation, investment cooperation with the recent EIB-JBIC MoU and regional cooperation e.g. region2region cooperation between clusters, and Prefectures. It may also accelerate the current trend for joint EU-Japan business partnership to operate together in third countries, e.g. in South East Asia, Africa, Latin America, and EU neighboring countries.

In a global context with rising protectionism and geopolitical uncertainties, succeeding in the EPA implementation is good for the EU and good for Japan. And on the global scene, it sends a signal that the EU and Japan stand together for sustainable cooperation and team up to preserve the benefits of openness.

END_OF_DOCUMENT_TOKEN_TO_BE_REPLACED
Report on EU-Japan Cluster & Region Cooperation This report is the result of a research conducted...
Analysis of EU-Japan business cooperation in third countries Cooperation between European and Japanese...
EU-Japan Newsletter, Issue #69 March 2020The Centre is pleased to present to you...
February 2020 Japanese Industry and Policy News Topics covered in the February issue:LEGISLATION...